‘My boots have been all over the world; they’ve done a lot of shutter clicks’

And the pair I’m wearing today are my second-oldest pair and they’ve seen better days, but fortunately R.M.Williams does fix and repair boots through their Boot Repair & Care Service, which is lucky for me.

This pair has got all sorts of marks on them from my many travels because I wear them so much, but they’re also covered in paint, because I’ve been painting in them recently. I’m hoping that I’ll get another newer pair soon.

I'm not actually originally from Australia. I'm from New Zealand. So in New Zealand, we didn't wear R.M.Williams boots... It'd be like wearing a Wallabies jumper, but since I moved to Australia I've been wearing them for many years now. In fact, I found a photograph of myself the other day in London in the eighties, and I was wearing my other pair of R.M.Williams boots, my oldest pair, although at that point they would have been quite new. So yes, those ones are 40 years old. They’ve actually lasted pretty well.

My boots have done a lot of miles. I've had them for years. They've been all over the place. I wear them everywhere actually. I wear them overseas and I've worn them all over Australia. When you sell a camera, you have to look into the camera and you can see how many shutter clicks it's done. And whenever I sell old cameras of mine, they’re never worth anything because the shuttered clicks are up in the millions. So, in the same language, in the same world, these boots would have done a lot of shutter clicks.

I just really like RM boots. They’re easy to put on and they’re so comfortable to wear – they’re not really too much of a statement either, which I like.” 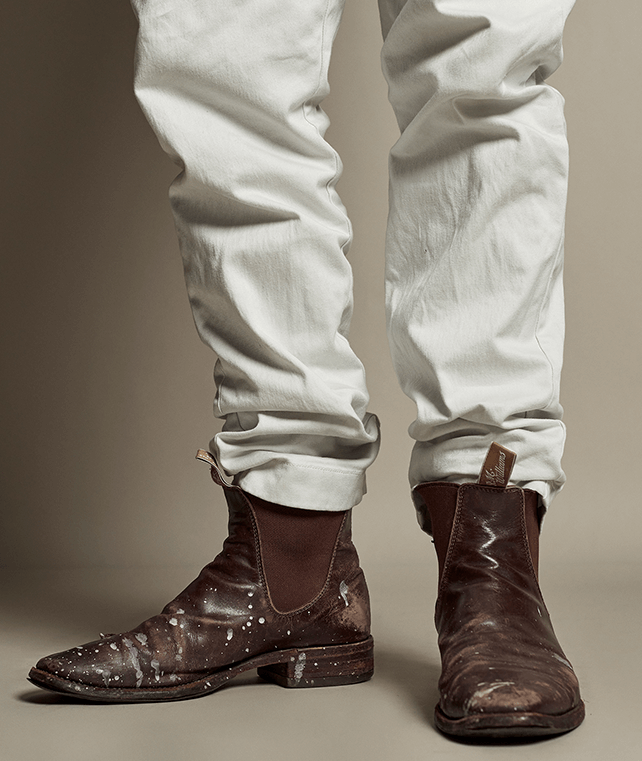